Last week, Wal-Mart confirmed that it will be bringing back its rollback program to 300 stores. The decision indicates a major shift in its retail positioning, according to an article on SeekingAlpha. "We're focused on low prices, up front, on the shelf," John Forrest Ales, a Wal-Mart spokesman, said in an interview. The rollback program will take the place of Ad Match, which the retailer began phasing out in early June as it aims to be less dependent on its rivals for pricing messages.

Wal-Mart originally scaled back on rollback prices to devote stronger efforts to store conditions, wage increases and e-commerce advancements. The return of rollback pricing will give the retailer greater pricing control in a very competitive environment. Grocery channel rivals like Aldi currently offer as much as 30 percent in savings for similar items when compared to Wal-Mart prices. Additionally, a recent pricing survey done in Chicago shows that Jewel-Osco lowered its basket prices by 13.7 percent since June. The price of an average comparable basket across all retailers in the Chicago market dropped by 3.4 percent over the same period.

Wal-Mart has long relied on everyday low pricing (EDLP) to win weekly baskets vs. in-market grocery store competitors. News of grocery stores like Jewel-Osco working to lower the cost of its overall basket certainly must play a role in Wal-Mart’s rededication to rollback prices. Traditionally, Wal-Mart held the advantage in EDLP, while grocery stores would point to their promotions — e.g., temporary price reductions, multiple purchase offers — to drive shoppers into their stores.

Market Track recently reviewed the top promoted categories on the front pages of CPG retailer print circulars over the past 12 months (ending in July 2016), and highlighted the most commonly featured products. Carbonated soft drinks ranked first among all categories, with nearly 7 percent share of the front page. Cereals ranked second with just under 6 percent share (shown in the table below). The top five categories were rounded out by potato chips, beer, and cookies and crackers. 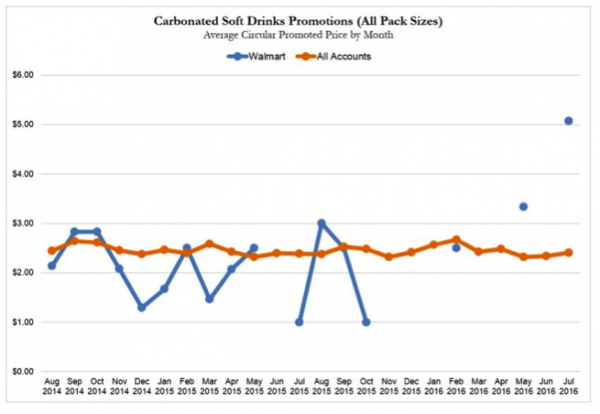 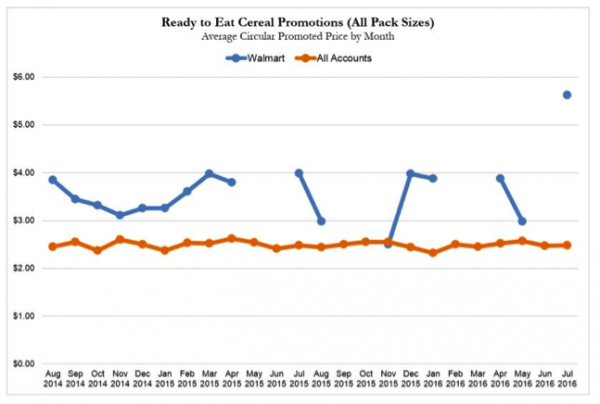 This is the battle Wal-Mart has traditionally fought. How does it communicate to consumers that, regardless of the attractive discounts and promotions offered by its competitors on key traffic-driving categories like soft drinks, Wal-Mart will still offer a better price at checkout for the overall basket? How does it grab shopper attention away from a loss-leader promotion on the front page of a Kroger circular, or a multiple purchase offer on HEB’s front page?

One tactic Wal-Mart has turned to is to make the comparison for shoppers. Just this year, Wal-Mart has run a series of television ads with price comparisons in specific regional markets — the most recent evolution of a tactic Wal-Mart used in print advertising numerous times over the past few years. Market Track’s creative advertising data shows a Wal-Mart ad that ran in the Jacksonville market, which compared Wal-Mart's prices against Winn-Dixie's prices. The ad features messaging that speaks to Wal-Mart’s pricing strategy, saying “Wal-Mart has everyday low prices on everything it sells, not just select items.”

A similar ad ran in the Charlotte market, but compared Wal-Mart prices to BI-LO prices instead. The ad also illustrated how customers could save on the total contents of their shopping carts, detailing an 11 percent savings when comparing a basket purchased at Wal-Mart instead of BI-LO.

Between engaging shoppers through its new TV campaign and refocusing efforts on EDLP, Wal-Mart is meeting the increase in both EDLP and promotional competitive pressures head on. As consumers become increasingly savvy in exploring options and finding the best value, CPG retailers will need to remain diligent in their competitive promotional and pricing efforts. 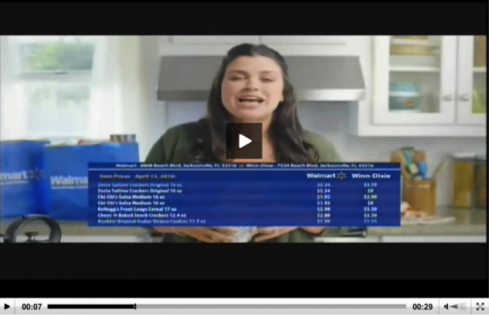 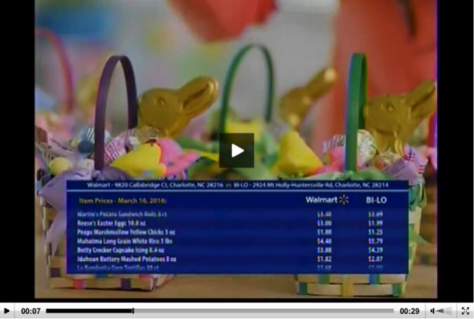 4 Creative Ways to Use Gift Cards to Drive Sales