Wal-Mart Apologizes for ‘Own the School Year’ Gun Display 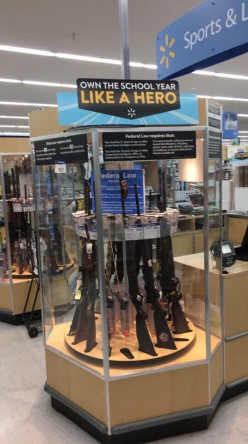 A Wal-Mart gun display positioned near a sign urging customers to "Own the School Year Like a Hero" has drawn such a negative response that the company has spent the last 24 hours repeatedly apologizing to outraged consumers, according to USA Today. A photo of a gun display with the back-to-school sign hung above it at one of Wal-Mart's stores in Evansville, Ind. went viral on Twitter Wednesday, with many people questioning the message Wal-Mart was sending to the public. According to reports, the sign was discovered and originally tweeted out by Leeanna May. The sign is reportedly part of the store’s superhero-themed marketing campaign. In a series of tweets, Wal-Mart denounced the display as "terrible," "definitely NOT okay" and a "regrettable situation."

"What's seen in this photograph would never be acceptable in our stores," the company said in a statement. "We regret this situation and are looking into how it could have happened." Wal-Mart also reached out to the customer and said they removed the banner from the inappropriate display. Wal-Mart is now looking into whether the photo was doctored or if the display of guns was part of a prank by customers.

Total Retail’s Take: Hopefully this is just an unfortunate incident for Wal-Mart. Store employees are often given instructions around where to place signs without knowledge of the merchandise they're posting it near, and an employee perhaps placed it near the gun display without realizing the message it was sending. This is the latest product-related controversy for Wal-Mart. In July, a racist term was used to describe a wig cap sold on Wal-Mart's marketplace by a third party. The retailer also drew ire in 2016, prior to Sept. 11, when a store used Coca-Cola products to build two towers signifying the World Trade Center. A banner reading "We will never forget" hung above it.

Preparing Your Store for Success Post-Pandemic