The Overgrown Retail Landscape is Due for Pruning

My seven-year-old son, Hendrix, has quite the green thumb. Last winter, we started preparing for our upcoming gardening season. Together, we researched what types of fruits and vegetables we wanted to plant, and we plotted it against our garden footprint.

Hendrix was diligent in making sure each plant had everything it needed to be healthy and produce a large harvest. Our garden was looking great and growing faster than we had ever hoped. As the season progressed, I started teaching him how to prune the overgrown branches to help the plants grow bigger fruits and vegetables.

He was immediately skeptical. He wanted to know how a plant could become healthier by cutting some of its branches. He didn’t believe this would help our garden grow better produce. In fact, he was convinced it would not only slow down our garden, but would kill it completely.

I urged him to trust me as we began to prune our garden. As the season progressed and we harvested the latest fruits and vegetables, Hendrix started to understand the importance of pruning our garden. Each week our garden grew bigger and better produce, and we ate like kings.

Today, Hendrix has little hesitation when it comes time to deadhead our garden. He knows through this process he will have more time to focus on the plants that are primed to deliver the biggest and best harvest.

The U.S. Retail Landscape is Like an Overgrown Garden

Prophecies of a retail apocalypse, the doom and gloom of retail, and zombie malls have spread across the internet. In the last 12 months, more than 10,000 retail locations have shut down and nearly 60,000 associates have lost their jobs.

It’s undeniable that stores have closed and more will follow, but I don’t subscribe to the complete death of retail that many are preaching, and neither should you. Here’s why: The United States has more retail square footage per capita than any other nation. And the delta isn’t even close. According to Forbes, in 2015 there were approximately 50 square feet of retail space per capita in the U.S. By contrast, Europe had about 2.5 square feet.

The consumer has shifted how they purchase. They have more product options to choose from and instant access to more information about what to buy than ever before. Just search the internet for gardening tools, plant food or watering cans — the choices are endless. How do you know what to choose? And to add to the confusion, consumers don’t know who to trust for advice on which products best match their needs. Only 4 percent of consumers trust traditional advertising.

And finally, too many retailers are trying to compete with Amazon.com by trying to be their own version of the e-commerce giant. Rather than leveraging the power of brick-and-mortar shopping experiences, retailers are increasing stock levels while simultaneously decreasing price points to their own demise. This is a battle that they cannot win.

The U.S. retail garden is simply overgrown and in dire need of a healthy pruning. The overrun, outdated, overstored retailers will continue to be exposed and deadheaded. As the retail landscape shifts, those that match the consumer’s needs and expectations will not only survive a challenging season but will flourish over time.

2 Ways to Flourish in an Overgrown Garden

In 1952, Les Schwab founded The Les Schwab Tire Company when he purchased OK Rubber Welders. Today, Les Schwab has 410 locations in more than eight Western states and is the second largest independent tire retailer in the United States.

Recently, my wife needed an impromptu tire repair. She packed up our two-year-old son and headed to our local Les Schwab for assistance. The assistant manager greeted her at her car door, helped usher them into the store, gave our son a drink and popcorn, and started investigating what brought them to the store.

Because it was an impromptu visit, the staff was 45 minutes out from working on her car. The assistant manager offered to take her and my son home and deliver the car after the tire had been repaired. All of this with no out-of-pocket cost.

Les built his company on the motto, “Our business is earning your trust.” By providing world-class service, the Les Schwab Tire Company now has our business for life. And I’ve shared this story with countless friends, neighbors and colleagues.

The concept of putting your consumers first seems obvious, yet many retailers have failed to effectively practice this widely agreed upon theme.

In 2014, TIME reported Macy’s was the fifth worst customer service retailer with a score of 76 from the American Customer Service Index (ACSI). Is it any surprise that last year Macy’s was expected to close 68 locations and post a sales loss of 4.3 percent? While Macy’s is currently pruning the excess, simply closing doors isn't enough. The retailer must make fundamental changes to the way it interacts with its customers, or this pruning will do nothing more than delay the inevitable: a complete uproot.

Sure, McDonald’s has served billions and billions, but Wendy’s is on a crusade to build an army of believers, and I’ve become one. At the 2017 WOMMA conference, Brandon Rhoten, Wendy’s former vice president of marketing, dug into the strategy behind the fast-food chain’s marketing efforts.

Rhoten pointed out the first step was understanding what separated Wendy's from its competition: one, they never freeze their hamburger meat and, two, their ice cream machines never break.

The second step involved leveraging these two differentiators at every touchpoint, and do so while remaining true to the Wendy’s brand. On Black Friday, McDonald's mistakenly tweeted a broken message. Wendy’s was quick to respond, and the likes, comments and shares spanned the internet. 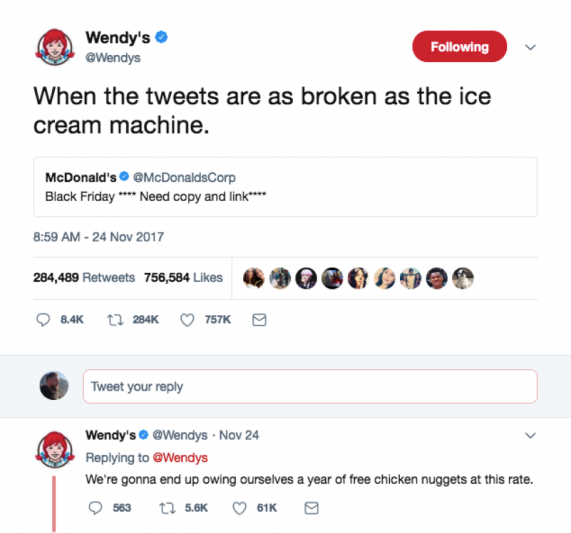 I’m not advocating for retailers to bash one another (unless, of course, it fits within your brand voice), but I am suggesting it’s important to understand what differentiates your brand from the competition.

The Sports Authority tried to compete with Amazon by stuffing a never-ending product assortment in its stores while simultaneously slashing prices deeper and deeper into its margin. This was clearly a bad move, as The Sports Authority entirely shut down operations in 2016. Had the company looked to compete with Amazon by offering something Amazon could not, the fate of this once mammoth retailer may have been dramatically different.

Bringing it All Together

Retailers like Sephora, REI and Flight Club are working hard to provide a consumer-centric, one-of-a-kind shopping experience. In a previous article, I detail some of these efforts. Not surprisingly, these retailers — and others doing the same — are producing positive year-over-year results despite predictions of the fall of retail.

The recent closure of retail doors should not be a surprise. The retail landscape is overgrown and overcrowded. As consumers help prune out the unnecessary retailers, those that work to provide a consumer-centric, dynamic experience will yield a bountiful harvest.

Nick Stagge is the head of brand strategy and senior director of marketing, Experticity, a company building the world’s largest network of influential experts and connecting them with the world’s top brands.

Related story: This is the Evolution of Retail

Nick Stagge is the senior director of marketing and head of brand strategy for Experticity.

Why Experience is Key to Brand Loyalty