Mobile apps vs. mobile web: Do you have to choose?

There’s been a lot of talk about the demise of the mobile web at the hands of mobile apps. One pundit sees apps dominating users’ attention; another predicts apps will kill off the mobile web. As the saying goes, “prediction is very difficult, especially about the future.”

The reality is neither solution will go away. Both the mobile web and apps serve a useful purpose, yet both have their limitations in terms of meeting the needs of users in any given context. Let’s consider some key facts.

The Biggest Brands Have it Made
Apps represent a small fraction of the total mobile revenue for all but a handful of the biggest brands. Amazon.com has more app revenue than mobile web revenue. Wal-Mart is getting close to parity between the two solutions, but most aren’t even close. Why? Benedict Evans, a partner at Andreessen Horowitz and longtime mobile analyst, summed it up most succinctly: “Do people want to put your icon on their home screen?” The answer for most brands is no. Does this mean retailers shouldn’t create native mobile apps? Absolutely not.

However, the goals are different. Apps, by definition, are for retailers most loyal customers (who else will download your app?). Therefore, instead of a generic shopping app, consider a VIP program for your best customers delivered through an app. This will drive more revenue from these customers and make their experience better.

Nordstrom, for example, targets its most loyal customers via its mobile app that delivers store notifications and promotions based on where shoppers are located. Customers can also see real-time inventory of stores closest to them. Another example is Dick’s Sporting Goods. The retailer has focused efforts on its iPhone app as a digital hub for the company’s Scorecard rewards program. Dick’s targets special promotions for its most loyal customers.

The app vs. mobile web discussion is really about audience segmentation and user behavior patterns. While apps are ideal for nurturing loyalty, the web is preferred for convenience and reach. A recent Forrester Research report (see the chart below) shows shoppers prefer to buy from mobile sites while on the go. Consumers show up to a retailer’s mobile site, not its app. Why?

A company’s mobile site is intimately connected with all its marketing activities, including email, SEO/SEM, affiliates, etc. A mobile app, even with deep linking, isn’t as richly connected. This richer interconnectivity gives the mobile web an advantage not only in attracting new audiences, but also in providing better consistency of experiences across channels and devices. 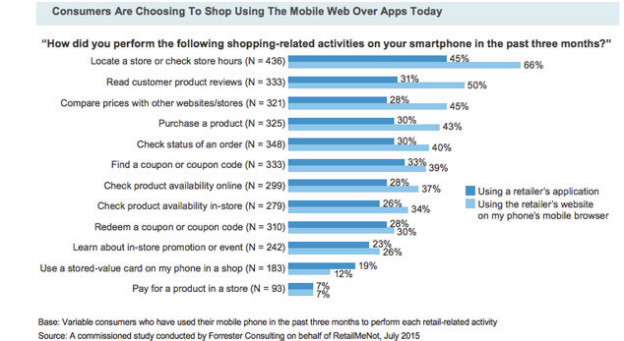 Apps Are for Loyal Users, Mobile Web is for Reach
The ongoing debate between mobile apps and the mobile web is about tradeoffs. Apps can be expensive to develop and they’re most useful for a niche audience. In fact, the stats around apps are sobering. Today’s consumers are spending over 85 percent of their time on their smartphones using native apps, but the majority of that time (84 percent) is spent using just five apps. Those will vary from person to person. For some, their top five could include social media or gaming, while others may spend more time within a messaging app.

According to both Nielsen and Forrester Research, communication and social apps account for the most usage followed by games, music and streaming video. Creating loyal app users isn’t easy — 69 percent of users open an app 10 times or less and a quarter use an app just once, according to research from mobile engagement platform Localytics.

A consumer may have one or two retailer apps on her phone, though she shops at many more stores. Her choices are tied to frequency and loyalty; she likely won’t download 10 different retail apps. Instead, she’ll use search and the mobile web to find information from retailers she’s more casually invested in.

The bottom line: The mobile web is best suited for audience reach, while mobile apps are most useful for driving engagement from loyal customers. If done right, both are strategic and valuable.

Ajay Kapur is the CEO and co-founder of Moovweb, a cloud-based platform that delivers optimized mobile experiences.

Ajay Kapur is the CEO and co-founder of Moovweb, a cloud-based platform that delivers optimized mobile experiences.

The Moovweb Experience Delivery Network (XDN), Moovweb’s flagship product, is an enterprise platform-as-a-service that enables sub-second React websites. Ajay has been involved with smartphones since before the launch of the iPhone. The prior company he founded published apps downloaded by tens of millions of users. Before that, Ajay invested in startups for Goldman Sachs.