The Amazon Effect: E-Commerce Sales Are Up for Retailers

Despite the rise of Amazon.com (or perhaps because of Amazon and the theory that a rising tide lifts all boats), more than a third of retailers (34 percent) in a recent Total Retail and IBM survey said their e-commerce sales have increased by 5 percent or more over the last two years. The report, "The Amazon Effect: How Retailers Are Adapting Their Businesses to Better Compete With the Industry Leader," analyzes the impact Amazon’s growing influence is having on the retail industry, and what retailers are doing about it as a result, from increasing spending on technology to implementing some of Amazon’s digital innovations on their own sites.

The report pointed out that while much attention has been paid to the recent struggles of traditional brick-and-mortar retailers — highlighted by a record rate of bankruptcy filings and store closures — perhaps not enough has been written about the growth of their online businesses. Consumers are increasingly shopping online and via mobile — on Amazon yes, but on other sites as well — and this chart proves that point. 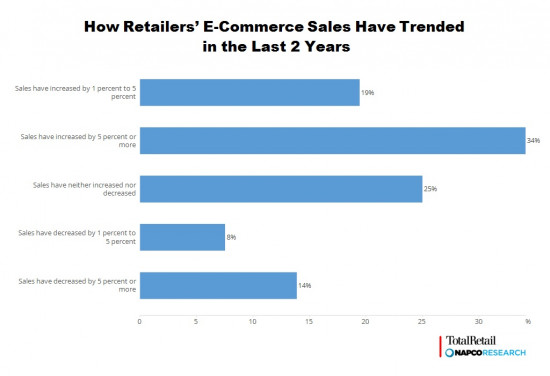 However, there was a sizable segment of the survey audience that has seen their online sales decrease in the last two years. Twenty-two percent of retailers said their e-commerce sales have decreased over the last two years. There could be several factors at play here, but one that’s most certainly part of the mix is the increasing influence of Amazon when consumers go online to shop. The Seattle-based online leader is taking market share away from many retailers, no matter the product category.

We’ll continue with our coverage of The Amazon Effect report in Thursday's issue of Total Retail Report, looking specifically at whether retailers are concerned over Amazon's move into offline retail. In the meantime, make sure to download the full report here.