Analysis of the FedEx General Rate Increase for 2017

With each year’s General Rate Increase (GRI) announcement, shippers inevitably ask, “How much is this really going to cost me?” This year, it got quite a bit harder to answer that question for FedEx shippers.

On Sept. 19, FedEx announced a GRI of 3.9 percent for Express and International, and 4.9 percent for Ground, Home Delivery, and Freight services. FedEx SmartPost rates will also change, but rates aren't yet available for preview. While the latest announcement is more modest than in previous years, the true impact may be costlier for many customers due to service guide changes such as the reduction in dimensional weight factor from 166 to 139.

FedEx has indicated that the change simplifies calculation of dimensional weight by standardizing the dimensional weight factor to 139 for all domestic and international Express and Ground packages; this change will also increase costs for some shipments by over 20 percent.

To help shippers understand the impact of the 2017 GRI, I explore the impact of the dimensional weight change in some detail, and then review overall price increases, selected changes in surcharges, and compare the FedEx announcement to UPS planned increases in 2017.

Dimensional Weight Factor … the Stealth Price Increase
Within the past few years, FedEx has decreased its domestic dim factor from 194 to 166, and now again from 166 to 139. This has had a significant impact on minimum billable weight for the most commonly used box sizes. 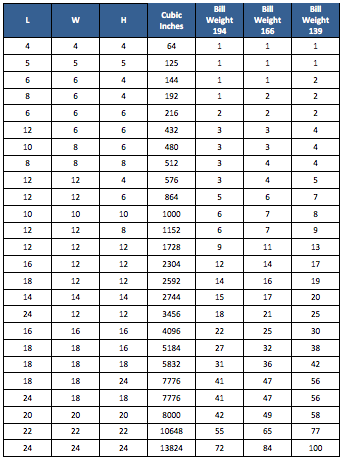 Consider a Zone 5 shipment that weighs 15 pounds and measures 18x12x12, or 2592 cubic inches. Beginning Jan. 2, this box will be billed at 19l pounds, an increase of 3 pounds over the 16-pound bill weight based on 2016 rules. At list prices, the net increase on this package ranges from 9.19 percent to 20.97 percent, much higher than announced increases. 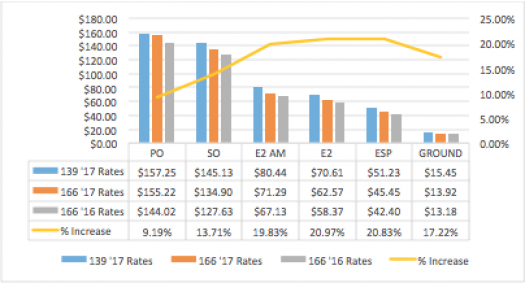 Let’s consider the same package, with hypothetical discounts for a midsized shipper. 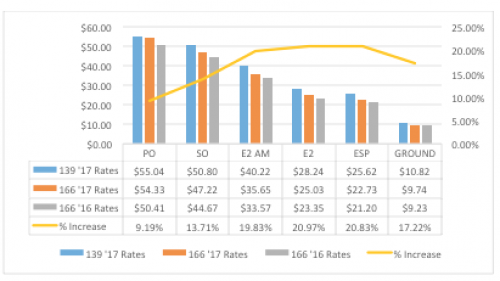 Applying discounts has reduced the dollar amount, while the percentage price increase remains the same.

The chart below illustrates how prices change for this shipment beginning with the 2016 rate with a 166 dim factor, adding the GRI — the 2017 rate for same weight, and then adding the cost of the dim weight — or the difference between 19 pounds and 16 pounds for 2017. 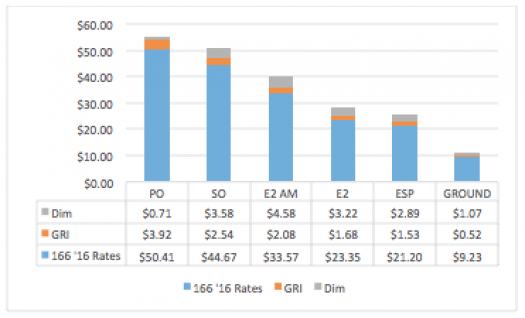 Now let’s consider a three-pound, Zone 2 shipment in a box that measures 12x12x4, or 576 cubic inches. Beginning Jan. 2, this box will be billed at five pounds, an increase of one pound over the five-pound billed weight based on 2016 rules. 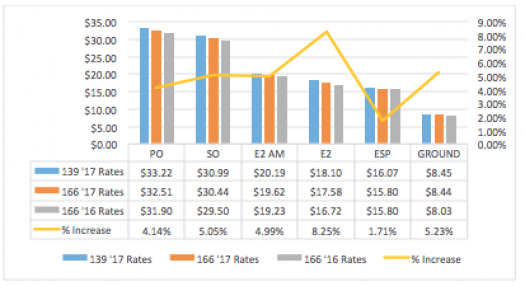 The impacts here are more subdued as FedEx raised rates less aggressively in zones 2-3 than in longer zones. This same package with discounts applied costs the same for two-day service and deferred products. 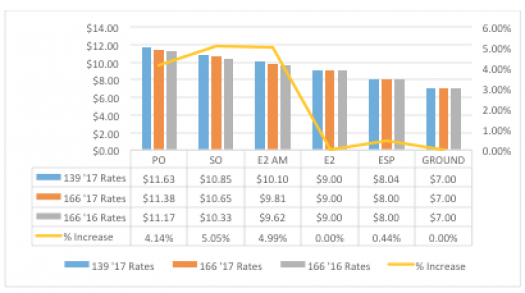 The general pattern is that longer zone, larger size, premium express shipments will be more impacted by this change than shorter zone, smaller size, deferred deliveries. A thorough, custom analysis would be required to clearly understand how these changes will impact a specific shipping profile.

Breaking Down the GRI
As with previous years, FedEx did not increase prices consistently across services, zones and weight breaks.

In the Express segment, also in line with prior year patterns, FedEx has unevenly applied price increases, averaging 3.24 percent for Priority Overnight, and 5.6 percent for two day. Interestingly, Express Saver rates do not increase for Zones 2-4, but Zones 5-8 prices have risen by an average 6.3 percent. 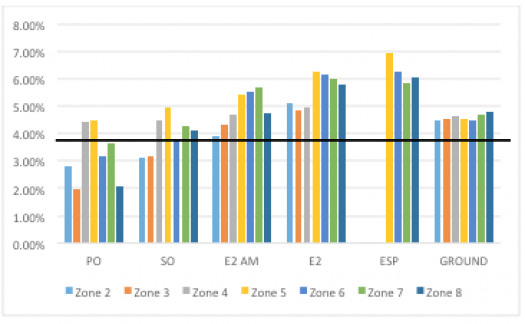 Figure 8: Percent Increase by Service and Zone. Average of all weights.

The line at 3.9 percent guides us to some interesting insights. Almost every service and zone combination below the line occurs in Zones 2-4, with Priority Overnight being the exception. We can also observe overall increases being higher for deferred services than premium, high-speed products.

This has been a pattern for at least five years now, with FedEx continuing to reduce what I call the “speed premium,” or the relative price increase a shipper must pay to get a faster delivery. 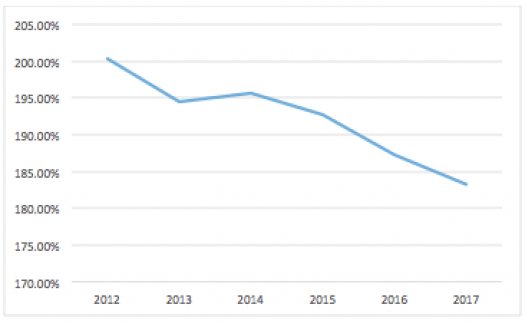 Shippers with significant volumes in the 51-100 pound range are in luck, as prices in this weight break were raised less than others across the board. Premium Services (PO, SO, E2AM) show a pattern of raising prices more at higher weights, excluding 51-100 pounds. This is a departure from 2016, when we observed higher price increases at lower weights. On average, the spread for deferred services (E2, ESP, GROUND) is tighter than with premium, at .99 percent compared to 1.46 percent for premium. 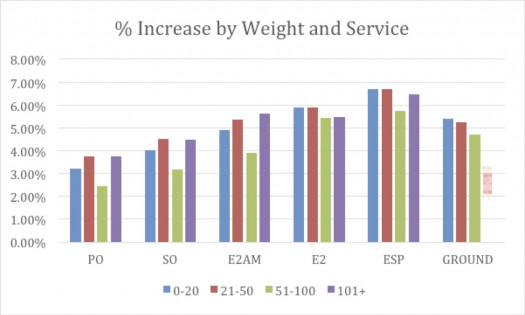 Modest Surcharge Increases for 2017
Surcharges can add significant costs to the price of a shipment, and 2016 saw some of the largest surcharge increases in recent memory. From 2015 to 2016, the list rate for Additional Handling and Oversize rose from $9 to $10.50 and $57.50 to $67.50, representing increases of 16.7 percent and 17.4 percent, respectively. 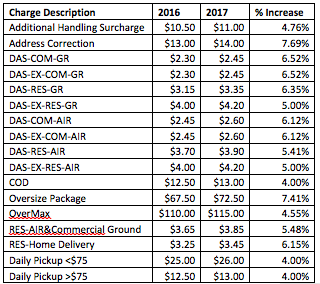 In 2016, most FedEx domestic rates matched UPS to the penny, with ESP being the most notable exception. 2017 is a very different scenario. With no alignment in list rates, customers can no longer simply compare discounts and minimums to get a quick calculation of who offers the better deal. 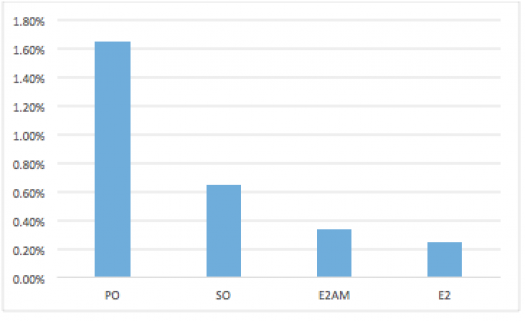 FedEx list rates are now cheaper on average than UPS for Next-Day and Second-Day services when comparing same weight and zone. That said, FedEx will apply dimensional pricing at 139 vs. UPS at 166, which will eliminate list price savings in many cases due to higher billable weights. Also, the relative price varies across carriers by weight and zone, so detailed analysis would be required to understand the potential value of switching.

FedEx still prices Express Saver significantly higher than UPS Three-Day at list rates, and much more so in the shorter zones. Zones 2-4 average 26.4 percent more than UPS, which is especially notable since FedEx took no price increase in these zones for ESP. 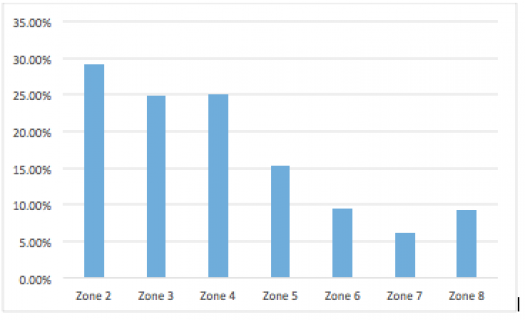 On average, FedEx Ground list rates are .05 percent higher than UPS for 2017. Weight break analysis tells a different story, with FedEx being cheaper on average below 70 pounds, and only becoming more expensive at the higher weights. Again, the dim factor must be considered to understand the true difference in costs. 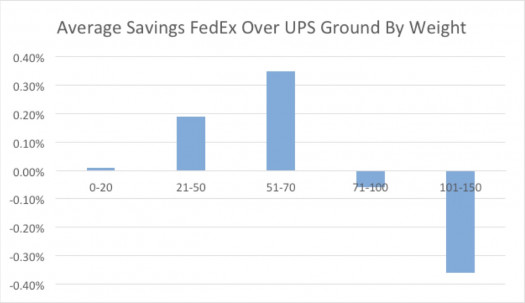 Closing Thoughts
Going into 2017, managing transportation spend is becoming even more complicated. Here are just a few of the changes:

As all shipments will not be impacted in the same way, it’s important for retailers to understand their package characteristics and have access to analytical tools to thoroughly model the impact of all carrier pricing changes.

David Faour currently serves as Shipware’s senior director of strategy and analytics, following over a decade in sales, marketing and pricing-related roles at FedEx.

The UK Merchants With the Top Gift Card Programs