Are Retailers Worried About Amazon's Push Into Brick-and-Mortar?

Long the undisputed leader in e-commerce, Amazon.com has turned its attention to the other piece of the retail puzzle: physical stores. In the last year-and-a-half, Amazon has opened seven bookstores across the country, with plans to open six more by the end of 2017. In addition, Amazon made a big splash last month with it announced the acquisition of Whole Foods Market — and its 400-plus stores — which figures to dramatically alter the grocery store landscape. Amazon clearly has made it known that it views physical stores as a growth opportunity for the company.

So, are traditional brick-and-mortar retailers worried that Amazon is going to overtake that channel much the way it has done with e-commerce? If they are, they're not letting on just yet.

In Total Retail's latest research report, The Amazon Effect: How Retailers Are Adapting Their Businesses to Better Compete With the Industry Leader, we asked respondents to do the following: Choose the statement below that best describes your company’s position as it relates to Amazon opening brick-and-mortar stores. The results, illustrated in the chart below, might surprise you. 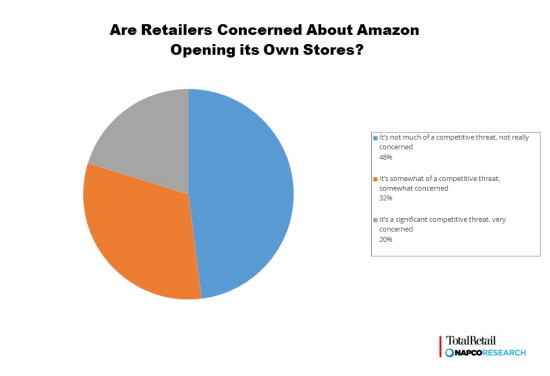 It will be interesting to see the differences in answers when retailers are asked this question next year, when it's entirely likely that Amazon will have opened even more stores and, more importantly, entered new product categories.

We’ll continue with our coverage of The Amazon Effect report in next Tuesday's issue of Total Retail Report, looking specifically at whether retailers believe their brick-and-mortar stores offer a competitive advantage vs. Amazon. In the meantime, make sure to download the full report!

Related story: The Amazon Effect: How Brick-and-Mortar Sales Have Trended the Past 2 Years

How to Deliver Personalized In-Store Experiences

The Key to Proper Lease Management for Retailers