JanSport, the backpack and outdoor gear brand, used email to announce its new deal with Disney. 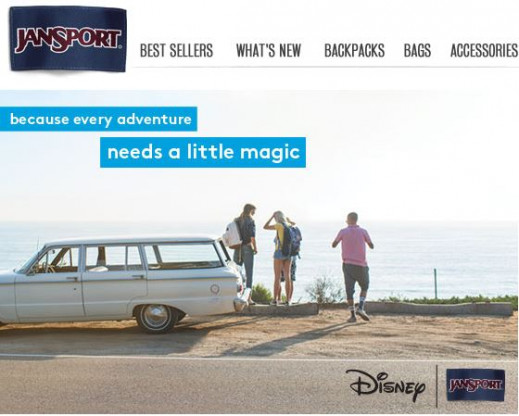 JanSport  is the world’s largest maker of backpacks. Since its founding 50 years ago, it’s been a company that has focused on combining practical utility with the thrilling.

This latest email campaign from JanSport is no different — it offers a little intrigue by putting the name of another iconic brand first: “Disney | JanSport - See it first!”

An image at the top of the email shows a few people, with backpacks, heading towards a shoreline. The headline doesn’t clarify matters much: “because every adventure needs a little magic.” The Disney and JanSport logos are superimposed on the roadside. 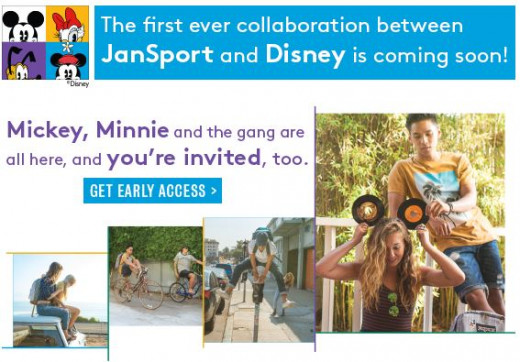 The next block down sneaks a peek at a portion of the faces of four great Disney cartoon characters. “The first ever collaboration between JanSport and Disney is coming soon!” reads the email.

The pictures below, however, reveal nothing more relating to the brands’ partnership. In fact, they barely show JanSport product at all. The call-to-action button invites the recipient to “get early access.”

Like all of the images and headlines within the email, the call-to-action button clicks through to the same JanSport landing page. Again, details are few. For example, a single image provides only a side view of one of the Disney bags.

However, the landing page does give JanSport an opportunity to keep its customers interested. “Shop Early” a form advises. In exchange for a 24-hour head start on shopping the new Disney collection, JanSport only asks for an email address.

The Takeaway
Create excitement and build anticipation for a new product or service by revealing just enough details to whet the customer’s appetite.