Well, at least there are some things that get better with age (besides wine). According to Total Retail's 2018 Salary Benchmark Report, retail professionals who are 65 years or older have the highest annual base salary. The report was based on an online survey sent to Total Retail's audience earlier this year.

When evaluating retail executives’ annual base salaries broken down by age, the survey revealed that respondents aged 65 or older are paid, on average, $101,088 per year, higher than any other age group. What does this mean? There’s a direct correlation between experience and salary received. Older, more experienced retail executives are making the most money. More experience usually means a better position, which generally equates to a higher salary.

When it comes to bonuses and other compensation above and beyond base salary, however, the money is more evenly distributed among age groups — except at the top. Retail professionals aged 55 to 64 years receive, on average, the highest non-salary compensation ($76,266). This is almost 36 percent higher than the next highest age group, 25 to 34 year olds, who received an average non-salary compensation of $53,217. 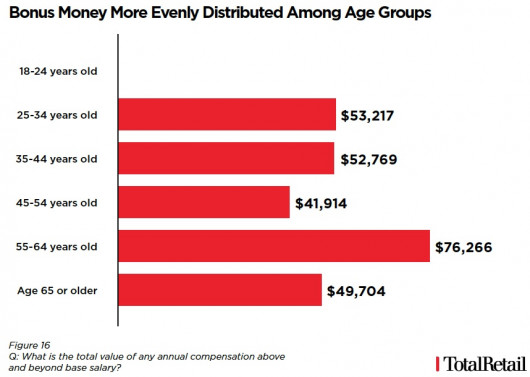 The peak earning years for retail executives is the decade before the traditional retirement age of 65. As the chart below indicates, retailers aged 55 to 64 earned, on average, a total compensation package (base salary plus any compensation above and beyond base salary) of $169,220, ranking first among the six segments surveyed. 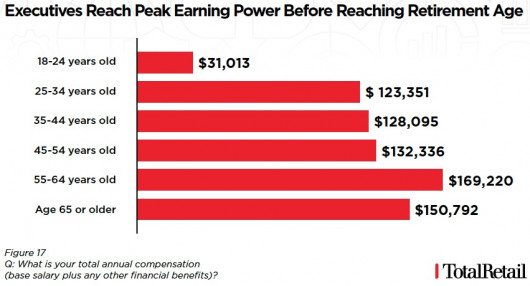 But don’t worry, respondents past the age of 65 are still doing well for themselves as they look to sock away money for their impending retirements. This segment had the second highest total compensation amount at just over $150,000 per year. The biggest step in terms of earning potential for our survey respondents was when they entered the 25- to 34-year-old age bracket. Respondents in that age bracket reported a nearly 300 percent increase in annual compensation vs. the bracket below it (18-24 years old).

This data could be helpful to you in several ways. If you're the retail employer paying a salary, for example, it serves as a good benchmark when thinking about the age of the people you're hiring and what they may expect to be paid. If you're the employee being paid a salary, it serves as a guideline to what your peers are making. However, it's important to note that these findings serve simply as benchmarks. There's no reason you can’t negotiate a higher salary for yourself at your current job (or a prospective one), no matter your age. It's not your age that should matter, but rather your skills and performance.

Do your research ahead of time and figure out what someone with your skills typically makes in your particular role. And then ask for a meeting with your current employer (or prospective one) and start to negotiate. You won’t get anything if you don't ask!