Everyone seems to be in one of two camps. This isn’t a Trump vs. Hillary thing, or even an Android or iOS thing. It's Pokémon Go or Pokémon No.

Even those not necessarily opposed to it, but not playing (like me), are certainly wondering what made Pokémon Go a global sensation in seemingly less than a few days (and why).

New to the game? Here’s a Pikachu-like primer on Pokémon Go. And everyone’s abuzz about the audience size (see the chart below from Bloomberg Fast Money) and the sudden jump in amazing Pokémon usage. 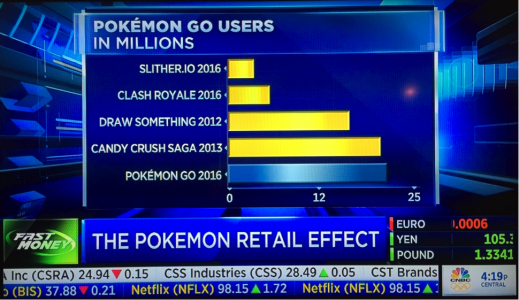 Pokémon Go is also being buzzed about as a big deal for brick-and-mortar stores because of its ability to one, get people outside and two, get people moving around and voluntarily exercising.   Arguably, these are historically the hardest two things to get Americans to do (next to joyfully jumping out of bed on a Monday morning). So that’s meaningful.

Heard about Lures? Some, like Barron’s, are saying yes to these new things that increase foot traffic, which will increase sales at retail, especially at malls.

However, anyone in retail, anyone lucky enough to be perennially on the hook for driving (and explaining) the ups and downs of e-commerce key performance indicators over time, knows that it's a retail law of nature that when you increase traffic, conversion goes down. Therefore, while the “more traffic does or does not equal more sales?” logic question may be intriguing to some out there, it’s really not what the Pokémon Go lesson is about for retailers — at least not entirely.

Pokémon Go is telling us that more retail traffic from folks walking around with their smartphones at the ready is good (this isn't new behavior, let’s agree, and if it’s possible, now folks are even MORE focused on their screens than ever before).

Let’s talk about the situational factors of today at play here. We live in a more uncertain world than ever before. We are uncertain of our present and future, our safety from terrorists, the stability of our jobs and our own financial safety. So, what can we count on? Death and taxes?!!??

I’m certain that this makes for a very disappointing, sad reality. And so, who can blame us for wanting a little escape when reality blows? Who wouldn’t want to escape, even just for a little bit, and have a little fun. Enter Pokémon Go. And enter the big fat opportunity called retail as entertainment.

More than ever, we're ready and looking for an entertainment escape. How else could we be in the middle of one of the worst summers of movie releases in years — and no one is talking about it?

Because we want to go anyway. Anything is better than contemplating reality (realities like the upcoming presidential election, increasing healthcare costs, and how the f*** did I run out of data again moments).

With augmented reality (AR) officially on the scene now, Pokémon Go really is just the younger sibling of Candy Cush, with better sensational payoff. It feels good to get outside; it feels good to hunt like our ancestors; it feels good to compete (albeit electronically). These are the same human sensations that have always felt good. We are at this point just primed to find that escape, that reason, to get outside and feel them again. And Pokémon Go — well, no pun intended — got us to GO.

So, no, I don’t think Pokémon Go is about AR, about adding more online advertising in new format (nothing against online advertising; I’m a digital marketer, let’s not forget). It’s about what we knew is the next big buzzword in retail. Experience. And. Entertainment. And, most importantly, doing it in a way that’s ownable and conversion-driving for our brands and stores. That’s the magic.

We knew this. It’s the year of the customer experience. We knew that after Facebook monetization and big data and omnichannel and mobile, the next big retail buzzword is experience. However, we don’t know what that means, what it looks like and how to deliver it.

In the simplest of humanistic terms, it means fun, people. The biggest f-bomb of all. FUN. It’s what games and any other relegated-to-weekend only activities are in our minds. Things we look forward to with happy anticipation, and all the humanoid sensations that go with them. That’s what Pokémon is here to teach us about retail.

Make it fun, and we’ll all come out and shop again.

Amy Madonia has led e-commerce and digital marketing efforts for many brands over the course of her 17-year career. With a record that includes leading and growing e-commerce businesses for brands including Temptu, Nautica, New York & Company, Michael C. Fina, Wrangler and Hanes, Amy’s responsibilities have typically included site merchandising, content and promotion development, analytics, social media, mobile, and remarketing.

Gen Z and Millennials Rely on AR in E-Commerce

How 3D and AR Tech is Impacting E-Commerce at SVS

How Brands Can Evolve to Meet Customers in XR