Bass Pro Shops acquired outdoor retailer Cabela’s last week in a deal valued at $4.5 billion. The two supply superstores cater to those with a love of the wilderness, specializing in supplies for hunting, fishing and camping. While it remains unclear whether this acquisition will lead to any store closures for Cabela’s, Bass Pro Shops said it would "celebrate and grow" the Cabela's brand. The deal also represents a significant expansion of the retailing empire controlled by Bass Pro Shops’ CEO Johnny Morris, who founded the company in 1972. Morris will now lead the Cabela’s brand as CEO and retain majority ownership.

Known for its large-scale destination stores, Cabela's has struggled to gain ground on smaller competitors and online retailers. The company's sales fell 1.3 percent in the first half of 2016, compared to a year earlier. The news of the acquisition comes 10 months after Cabela's put itself up for sale at the recommendation of hedge fund Elliott Management, which declared the retailer undervalued and urged the company to consider a sale or reorganization. The companies stated that they expect approval of the deal in the first half of 2017.

Historically, these two retailers have battled for the same shopper. While Bass Pro Shops has acquired a key competitor in the space, there's much work to be done. The two retailers followed very different advertising and promotional strategies to win that shopper. Market Track looked at promotional and advertising data on Cabela’s and Bass Pro Shops to get a better idea of how they might resolve their differences in strategy once the acquisition is finalized. We see that when it comes to circular promotional strategy, Cabela’s ran significantly more circulars over the past two years than did Bass Pro Shops. In fact, Cabela’s ran 53 percent more digital circulars in this time period. This is particularly noticeable during months like February 2015 and September 2016, when Bass Pro Shops didn’t release any circulars. 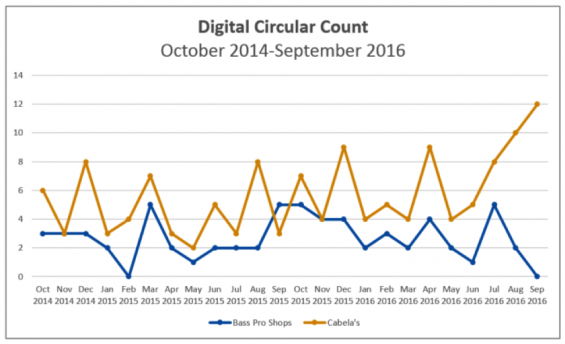 While Cabela’s uses print circulars more frequently, the disparity in page count between the two retailers isn't as extreme. Bass Pro Shops published only 11 percent fewer circular pages when compared to Cabela’s, despite producing a lot fewer circulars. This suggests that the difference isn’t about a preference for other advertising channels, but more about the circular advertising strategy they developed individually. 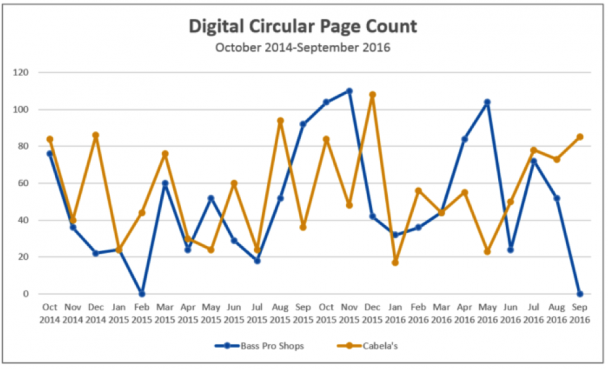 Market Track also analyzed the number of unique breaking television ads from Cabela’s and Bass Pro Shops. Our data shows us that Bass Pro Shops released five times as many unique breaking ads than Cabela’s in the same two-year period. While this doesn't speak to the overall television ad occurrences between the two outdoor retailers, it does show us a key difference between them in terms of how often they’re producing unique ads with new messaging.

When examining the differences in creatives between the two, we found some noticeable differences in recent TV ads for fall sales. The Cabela’s ad, which aired on Sept. 7, follows a customer preparing for the hunting season. The ad focuses on the shopper browsing a large selection during Cabela's “Fall Great Outdoor Days” sale and ends with footage from a successful hunting trip. Meanwhile, Bass Pro Shops aired a much simpler TV ad for its “Labor Day Blowout” sale during early September. The 15-second spot doesn't take a narrative approach; instead, it only lists out specific sales items, like jeans, hunting attire and cameras.

When looking at the online display category, we found examples where both outdoor retailers emphasized “Free Shipping” offer codes in the past three months, suggesting that both brands are aware of the impact of e-commerce. 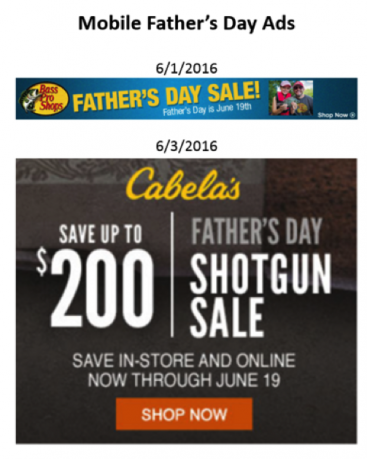 Dan Muller is a marketing specialist at Market Track. Market Track monitors creative advertising across all channels, as well as print and digital promotional data throughout the U.S. and Canada, giving advertisers the ability to track competitive activity. Contact us to see how we’ve helped over 1,000 clients from across all industries monitor advertising trends.