Managing for the Long Term Pays Off, Research Shows

Managing with a long-term view of your company in mind is the way to go, according to new research from McKinsey Global Institute in cooperation with FCLT Global. This study found that companies that operate with a true long-term mind-set have consistently outperformed industry peers since 2001 across almost every financial measure that matters, from revenue to profit.

The data for this index was drawn from 615 nonfinance companies that reported continuous results from 2001 to 2015, and whose market capitalization in that period had exceeded $5 billion in at least one year. To further ensure valid results and to avoid bias, the researchers evaluated all companies in the index only relative to their industry peers over several years, and conducted other tests and controls to ensure statistical robustness.

To construct its Corporate Horizon Index, McKinsey Global Institute identified five financial indicators. The indicators were chosen because they matched up with five hypotheses McKinsey had developed about the ways in which long- and short-term companies might differ. They are as follows: 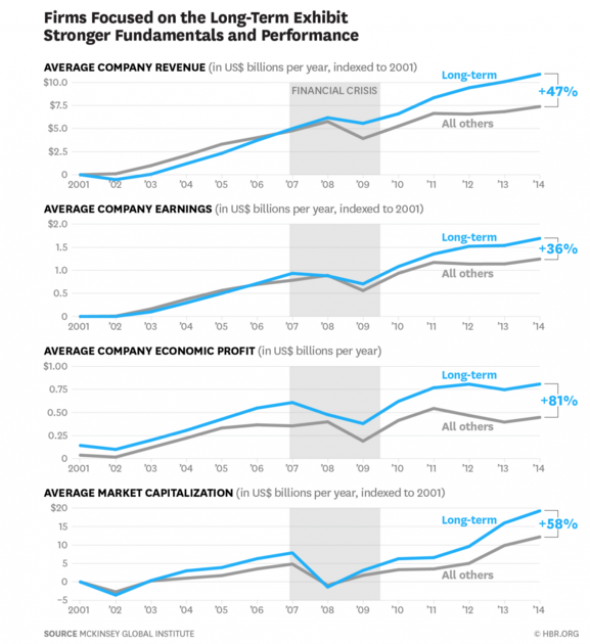 McKinsey Global Institute calculated that the U.S. GDP could have grown by an additional $1 trillion if all companies managed for the long term. Five million more jobs would have been generated as well.

Therefore, don’t feel pressured to cut discretionary spending to avoid risking an earnings miss. Planning for the long-term success of your business will lead to stronger fundamentals and performance. Just ask Jeff Bezos and Amazon.com.