Macy’s announced a major strategy shift last week that will affect a significant number of its brick-and-mortar stores. The department store chain will be closing 100 of its 728 locations next year — approximately 14 percent of its stores. These closures signify Macy’s acceptance of the modern retail landscape laid out by e-commerce giant Amazon.com, while also helping to mitigate struggling profits. This decision comes as part of a larger effort to recreate its physical store presence “as customer shopping preferences and patterns evolve, reallocating investments to highest-growth-potential store and digital businesses,” the retailer said in a statement.

It’s not all bad news for Macy’s, however. The department store and its sister chains, Bloomingdale’s and Bluemercury, have seen what the company calls “exceptional" digital sales through websites and apps. Macy's reports that its online business has seen growth at a compounded double-digit rate each year for the past 15 years. While Macy's brick-and-mortar business has struggled through six straight quarters of decline, it isn't alone. Retailers like Gap and Kohl’s have also initiated store closings. Even Wal-Mart, the nation’s biggest retailer, is closing 154 of its stores.

One of the leading indicators of the shift in focus to e-commerce is the change to advertising and promotional strategies to engage shoppers and win their business. Market Track reviewed promotional volume data to see how the digital shift has affected advertising for these retailers. When looking at the total number of print circular pages for Kohl’s, Macy’s and Wal-Mart, we see the numbers are trending down for all three. The noticeable decline suggests that retailers, like Macy’s, may be shifting advertising resources away from vehicles traditionally used for driving traffic to store locations.

On the other hand, our data* shows that email advertising is trending up for the three retailers, indicating an increased focus on pushing traffic to their digital properties. Wal-Mart specifically made a dramatic leap in volume, going from 184 emails sent in January - July 2014 to 898 in that same period this year. Macy’s email volume skewed higher in the 2014 period with 716 and remains competitive with Wal-Mart at 832 in January - July 2016.

*Market Track monitors opt-in retail email advertising, with no purchase history. Emails tailored to individual consumers based on past purchases are not included in this analysis.

It’s not just Kohl’s, Macy’s and Wal-Mart changing their strategies to become more digitally focused, however. Retailers in general are making this shift. Recently, Market Track found similar trends in an analysis of advertising data from Best Buy, Home Depot, J.C. Penney, Kmart, Kohl’s, Lowe's, Macy’s, Office Depot, Sears, Staples, Target, Walgreens and Wal-Mart. The charts below measure the total circular pages and email volume from all of these retailers combined during the January through July period. The sum of circular pages was just over 8,000 during this time frame in 2014, but dropped below 6,000 in 2016. Our email data shows the inverse happened in this channel, with 5,034 emails tracked in January - July 2014, increasing to 8,392 in the 2016 period.

When we break these figures down by retailer, we can see there are only a few exceptions to the digital trend. Office Depot has steadily increased its circular page count over the past two years, from 224 to 363 during this period. It has also dialed back on email advertising, going from 317 to 267 in the same time frame. Additionally, we see that Target more or less maintained its circular page count with a slight increase, but it also amped up its email marketing from 142 to 364. 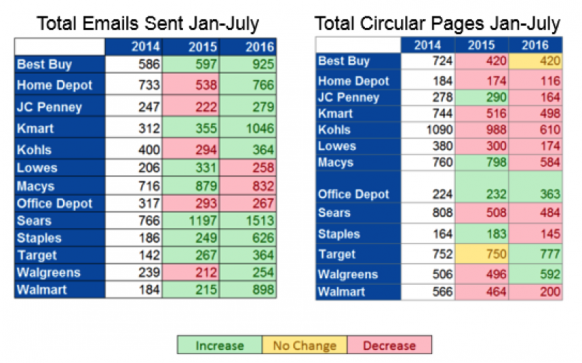 As consumer habits change, retailers should be prepared to make adjustments to the way they monitor digital channels. Those with limited focus on digital advertising will need to expand their competitive intelligence as online purchases become more commonplace.

Related story: A New Approach for Marketing to Back-to-School Shoppers

How Catalogers Are Responding Post-Pandemic

What Would Happen if …

Post-COVID Strategy … Be Careful Not to Overmail