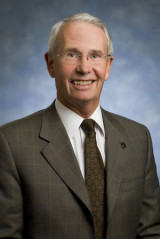 Macon F. Brock Jr., co-founder of the Dollar Tree chain of discount stores, which grew into a Fortune 500 company, has died. He was 75. Brock died Saturday at his home in Virginia Beach. His wife said he died of complications from idiopathic pulmonary fibrosis, a lung disease. He underwent a lung transplant in 2014.

In 1986, Brock, his brother-in-law and a friend created Only $1.00 stores after having success in the retail toy business. They changed the name to Dollar Tree in 1993. Brock served as Dollar Tree’s president from 1986 to 2001, its CEO 1993 to 2003, and chairman of the board from 2001 until September of this year. He remained on Dollar Tree’s board and held the chairman emeritus title.