Lidl Comes to the US

One of Germany’s biggest supermarket chains is coming to the U.S. to see if its unique model can find success here. Lidl is a grocer known for competitive prices and private labels, and it plans to expand along the East Coast, from Georgia to New Jersey, by 2018. According to an article on Forbes, Lidl invested $77 million in a U.S. headquarters in Virginia, and around $120 million in a distribution center. Recently the German grocery chain told the Houston Business Journal about plans to open stores in Texas, but didn't identify specific locations. Lidl has spent over a decade studying the U.S. market, one that currently has more than 38,000 supermarkets with sales of more than $6 billion.

As they prepare to compete with U.S. grocers, Market Track ran an analysis of the top-promoted products over the past 12 months from Lidl’s soon-to-be top grocery competitors – Aldi, Kroger, and Wal-Mart. When looking at the top 15 circular promoted categories, we see that Aldi allocates a larger percentage of its total promotions to perimeter-store categories like produce, fresh proteins and beer/alcohol. Conversely, Kroger and Wal-Mart provide more overall circular support to center-store items.

When running the same analysis on exclusively front-page promotions, we get a slightly different picture. Kroger has promoted more centerplate meat products, with beef, chicken and pork appearing in its top-five promoted categories. However, we still see very few produce/fruit categories being promoted by Kroger and Wal-Mart in the top 15 view. Meanwhile, nine of Aldi’s top 15 promoted categories on the front page fall into the fruit or vegetable category. 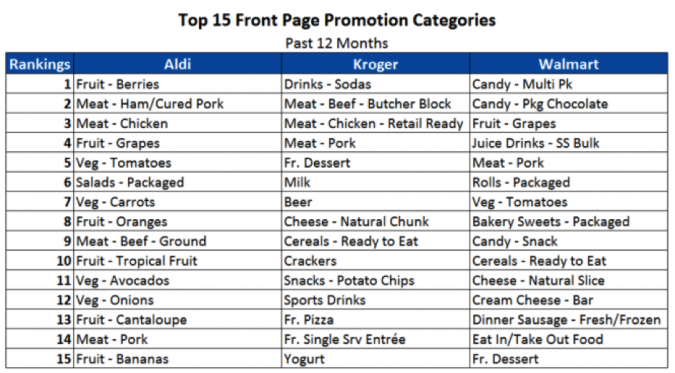 While the three stores varied the tactics used in their promotional strategies, we did find some similarities in their ad messaging over the past year. All three advertised “fresh” or “organic” messages in online display ads running this year. Aldi used the slogan “Spend less on fresh” in a campaign starting in the beginning of 2016. Wal-Mart and Kroger both used images of blueberries to promote the importance they place on freshness, with Wal-Mart going a step further with offers of “locally grown fresh produce.”

Another advertising strategy we’ve noticed amongst all three retailers is the use of recipes in online display ads. Each of Lidl’s would-be competitors is using this tactic, but in slightly different ways. Wal-Mart featured ads containing specific recipes, like one for stuffed mushrooms that ran during the 2015 holiday season. On the other hand, Aldi took a more general approach by linking to a page containing multiple healthy recipes near the end of the holiday season. Kroger also took a slightly different approach to recipe messaging by linking a new recipe video each week.

As Lidl continues to push forward into the U.S. market, we’ll start to get a clearer picture of its creative messaging and promotional strategies relative to the competition. According to Forbes, Aldi is considered Lidl’s top rival in Europe, and it could remain that way overseas. With a 40-year head start in the market and a recent announcement of a $3 billion U.S. expansion, Lidl will need to differentiate its strategy from the likes of Aldi, Kroger and Wal-Mart in order to win over the American consumer.

Dan Muller is a marketing specialist at Market Track, a company that monitors creative advertising across all channels, as well as print and digital promotional data throughout the U.S. and Canada, giving advertisers the ability to track competitive activity.

The Money Retailers Are Leaving on the Table

A Next Generation of E-Commerce Marketplace Titans