For retailers, it's becoming a scary time to be over-reliant on the tried-and-true forms of digital marketing. The perfect storm of crowded platforms, consumer fatigue and GDPR is severely limiting free distribution mediums such as email, text and social, thus driving more dependence on paid advertising. However, the cost of ephemeral ad units continues to rise, leaving retailers desperately looking for growth sources that are evergreen.

More than changing consumer habits and demographic trends, the rising cost of online customer acquisition is a powerful headwind. Second to the omnipresence of Amazon.com, this is the “big thing” in retail.

However, there's an emerging new opportunity in premium publisher content that starts with a simple consumer search.

Consider the search below for “best pressure cooker,” a search that has grown more than 80 percent in the last two years, according to Think by Google. When this search is done in Google, most of the organic results are reviews in SEO-ranked content from publications such as Wirecutter and Good Housekeeping.

These pressure cookers are sold by a plethora of merchants, but notice that while retailers aggressively bid on product listing ads (PLAs) to win traffic from Google, too often they often cede all of the revenue from the articles below to Amazon. 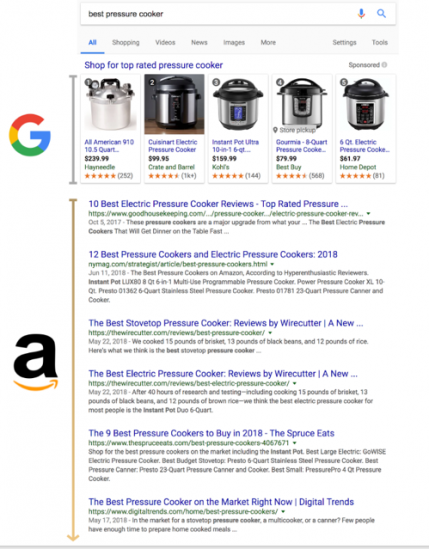 In fact, according to SimilarWeb, Amazon drives roughly 20 percent of its traffic from this channel (or 650M visits every month). 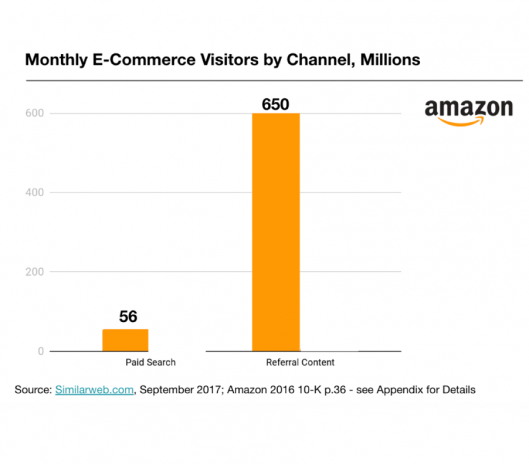 However, the SimilarWeb data also shows that not only is content Amazon’s largest paid channel, it's also its most profound performance edge against Walmart. Across many vital keywords, Walmart has admirably narrowed the gap in paid search, but lags far behind in referrals.

There are important long-term ramifications here. Unlike paid search, social or even influencer campaigns, great content can continue to drive revenue years after it's originally written. There's excellence in the permanence.

Retailers Push Back Against Amazon

At Narrativ, we analyzed more than 300,000 links across and found that while 65 percent of them direct to Amazon, half of these links are for items carried by other retailers. Twenty-four percent of the time, the other retailers has the item at a lower price. In these instances, Amazon isn't winning due to innovation, convenience or price; it's winning by default.

So how can multibrand retailers push back against Amazon's content monopoly and access this high-performing channel? Ironically, it starts by thinking like Amazon and recognizing that premium content is a far larger opportunity than traditional affiliate marketing. As a natural extension of search, content budgets should be managed by performance marketing teams.

Target-owned Dermstore has mastered this dynamic to attract hundreds of thousands of new shoppers every month. The retailer aggressively bids for nearly all products it carries that are recommended by premium publications such as The Strategist and Allure. In doing so, Dermstore has seen a 685 percent increase in revenue from the channel, with 70 percent of the visits coming from people who have never gone to dermstore.com before. In a nutshell, Dermstore has figured out the magic formula for making content scale at the rate of search.

Amongst brands, Diane von Furstenberg (DVF) has worked with Narrativ to own 99 percent of its mentions in content. Rather than let a third-party retailer scoop up valuable traffic from articles about DVF products, DVF owns the brand experience, seeing content as “an entry point into its universe.” A key benefit here is the opportunity to deliver serendipitous experiences to shoppers after they engage with content by exposing them to relevant recommendations on DVF’s digital properties.

As a $25B acquisition channel in e-commerce alone, content is far too important for retailers to ignore. From toothbrushes to TVs, consumers are searching for the best; it’s up to retailers to make sure Amazon isn’t the only one to meet them.

Mike Mallazzo is head of marketing at Narrativ, a media technology company that is reshaping the media and commerce infrastructure.

Mike Mallazzo is Head of Marketing at Narrativ.

How to Improve Customer Retention Through UGC