How Retail Execs Are Awarding Raises

Our coverage of Total Retail’s first annual Salary Benchmark Report this week examines how retail executives — CEOs/presidents/founders; chief marketing officers; C-level execs other than CEOs and CMOs; and vice presidents — view the approaches taken by their companies to award raises. This data can be looked at in two different ways: one, how their own individual raises are determined, particularly those in a position where they're reporting to another person or entitity (e.g., board of directors) and, two, since these executives are frequently making compensation decisions for employees that they manage, what are they basing their decisions upon when deciding whether to give an employee a raise.

The Salary Benchmark Report was produced based upon the responses to an online survey that was sent to Total Retail’s audience over a two-week period last summer. Survey questions asked respondents about their salaries, benefits (financial and nonfinancial), opinions on their career paths and compensation fairness, as well as demographic information. The survey resulted in 660 responses; the C-suite respondents accounted for 182 responses.

The chart below shows these 182 respondents’ answers to the following statement: Choose from the list below the method that most closely matches your beliefs about how your company decides eligibility for a raise. (Click on the chart to get an expanded view.) 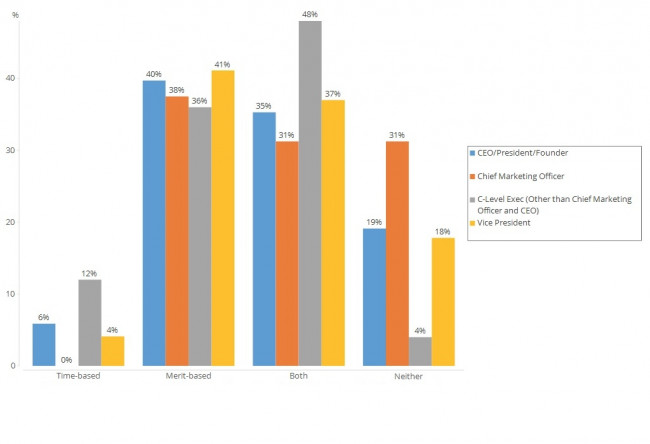 An analysis of how 182 retail executives believe raises are awarded at their companies.

Here are some of the key findings to emerge from this chart:

Related story: Do Retail Execs Feel They're Being Compensated Fairly?