Retail Execs on Top Initiatives, KPIs, and Amazon and Trump

SLI Systems recently published its Q1 2017 E-Commerce Performance Indicators and Confidence (EPIC) Report. The key takeaways? Online retailing continues to prove its resilience with strong growth and a positive forecast for 2017 across regions.

In fact, 94 percent of retail professionals were expanding their businesses during the first quarter — whether adding new product lines, selling to new geographic markets or making company acquisitions. When asked to compare Q1 2017 to the same quarter last year, the vast majority cited performance improvements across an array of metrics, including online revenue, site conversion, mobile transactions and site traffic.

The electronic survey, conducted from Feb. 6 to March 6 by SLI Systems, a global provider of e-commerce solutions and services, received qualified responses from more than 200 retail professionals headquartered primarily in the U.S. and U.K., as well as APAC. All respondents sells goods or services online, with 59 percent also selling in stores, more than a third via catalogs and call centers, and 42 percent on at least one marketplace. In addition, 87 percent work in a manager role or above, with 20 percent holding executive-level positions.

Here are a few highlights from the chart-packed 13-page report:

An impressive 80 percent of respondents expect an increase in online revenues and profits, and 46 percent expect an increase in their in-store revenues and profits. When asked about an array of key performance indicators (KPIs) in Q1 2017 compared to Q1 2016, responses were marked by widespread confidence. For instance, 71 percent expect increased site conversion, more than half expect increased average order value, 41 percent expect decreased bounce rates, and a whopping 76 percent expect either a decrease or no change in their fulfillment costs per order. The sector is clearly bullish about digital performance at this point in 2017.

When asked about their confidence in mobile transactions in Q1 compared with the same quarter last year, 73 percent of retailers expect an increase and 20 percent forecast no change. This response demonstrates the continued importance of delivering a relevant and frictionless path to purchase for shoppers using mobile devices. 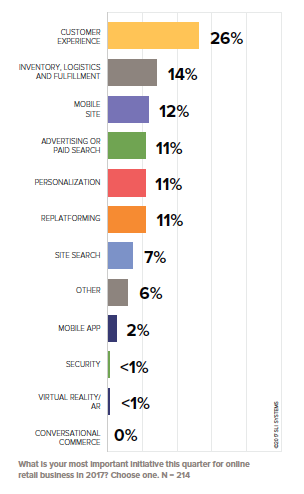 Customer experience (CX) was by far the top initiative for online retailers in the first quarter of the year, with 26 percent of retailers citing it. Inventory, logistics and fulfillment ranked second (14 percent), followed by mobile site (12 percent). Among those who cited mobile as their top initiative for the quarter, the group selected “Mobile Site” six times more than “Mobile App.” Trailing the list of “realities” was virtual reality, which garnered less than 1 percent of responses as the top Q1 initiative.

Taking a look at sentiment around two top-of-mind factors facing retailers today in a global market, the study found that 32 percent of U.S. respondents, 38 percent of those in the U.K., and 47 percent in Australia view Amazon.com as more of a competitive threat in Q1 2017, compared to the same quarter last year.

A regional look at how retailers expect the new U.S. presidential administration to impact their businesses in 2017 found U.S. retailers generally anticipate the new administration will have:

In addition to in-depth survey responses, the report looked at consumer behavior from retailers across the globe using SLI Systems’ cloud-based e-commerce solutions. Aggregate network data showed retailers are, in fact, delivering efficient and relevant online customer experiences, evidenced by shoppers using fewer words in site searches. Analysis of 1.5 billion site searches found the percent of queries with just one word increased from between 2013 and Q1 2017 from 45 percent to 56 percent of all queries.

Chris Brubaker is the chief marketing officer of SLI Systems.

Finding Your Brand's Place in the Metaverse