Dads in Search: How Char-Broil Boosted Organic Traffic 110% in 2 Years

Sales cycles for B-to-C retailers are short, but long for B-to-B — or so the common thinking goes. But some B-to-C sales cycles take time; grills, for instance. Consumers replace their grills every four years or so, giving merchants just two chances per decade to make a sale.

Those are rough odds, especially when you take into account the flood of marketing that sweeps over us daily. For example, 111.1 billion consumer emails are sent every day, says research group Radicati. Given the proliferation of ad blockers, how can retailers even be sure they’ll reach consumers when they want to?

One answer: focus on attracting consumers organically, continually engaging and influencing them with educational content. My choice of grills to use as an example is no accident. As one of the most common symbols of Father’s Day, let’s take a look at how Char-Broil harnessed the power of organic search to help dads everywhere get grilling.

Family-owned Char-Broil reports significant site traffic growth by expanding into educational content. Since 1948, the company has been one of America’s favorite grill brands, offering gas grills, electric smokers and more, but as I noted earlier, its sales cycle is long. For Brendan Anderson, vice president of marketing at Char-Broil, addressing that issue starts with understanding consumers. “We need to ultimately understand the consumer — what they desire from our brand and not be self-serving, but instead serve the consumer,” Anderson said.

At the same time, Char-Broil’s marketing team is small. “There are only so many initiatives we can tackle throughout the given year,” said Leandi McMurphy, senior digital marketing manager at the company. How can small teams create a hefty library of helpful content given bandwidth constraints?

Char-Broil partnered with my team (at Conductor) to focus its efforts and produce a list of relevant topics its audience was actively searching for online. Insights from organic search are extremely important for brands looking to figure out what content types and topics they should create; it helps you see what people are actively searching for around products.

Char-Broil took those findings and, with a team of in-house and freelance content creators, began developing material that would engage buyers even during those fallow purchase periods. Visitors to the company's site could begin finding educational content, such as Steak 101 or recipes organized by ingredient or theme, like the Burger Hall of Fame or Slam-Dunk Appetizers. From experienced grill masters to those just getting started with a spatula, the key to success was focusing on what its customers needed and how Char-Broil could help them instead of just late-stage content designed to sell grills.

Based on a study Conductor produced last year, the positive dividends from creating this kind of content don’t end with a single recipe or helpful tip. According to our findings, consumers that read educational content from a company are 131 percent more likely to buy from it vs. its competitors, with respondents describing such companies as helpful (78 percent) and trustworthy (64 percent).

As the Char-Broil team tracked the success of its published content and planned new content initiatives, it mapped each piece of content to the progress consumers were making along their search journey. Scrolling through the landing page of Char-Broil’s Charcoal Grill Basics, for example, users discover four lessons (and their subsets) divided by grilling stage: prepping the grill, cooking, planning the next cookout meal, and cleaning the grill. 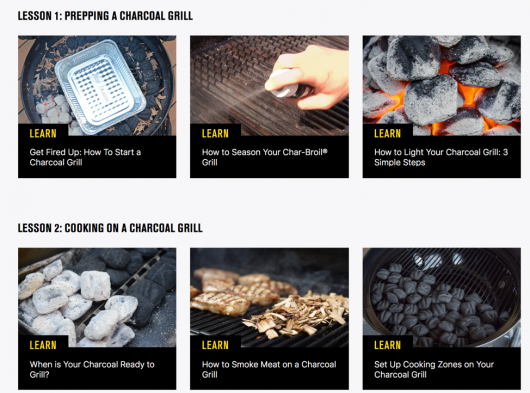 Char-Broil created many articles that answer (and are optimized for) highly specific searches about grilling. Most importantly, those articles are giving dads and grillers of all kinds the information they need to make the most out of their grill purchase, and building a long-lasting relationship based on trust and value between Char-Broil and its customers.

By applying that content strategy to its marketing efforts, Char-Broil initially hoped to grow its organic traffic by 10 percent, which was “a pretty lofty goal, considering it averaged 1.5 percent to 2 percent in previous years,” said McMurphy.

The strategy boosted Char-Broil’s organic search traffic more than 110 percent year-over-year. Overall site traffic climbed 56 percent, and the how-to or service content that the team published outperformed the company's homepage. The results exceeded Char-Broil’s goals six times over. Today, McMurphy and the Char-Broil team are “big believers in the power of organic content and organic search.”

The moral of this story? Dads (and everyone else) love grills, but even more importantly, developing content that responds to customers’ needs can lead to real, measurable growth and increased brand loyalty.

Get started on your journey to customer loyalty, higher organic traffic and increased revenue for your brand with the following three steps:

In no time you'll build an army of deeply loyal customers who look to you for value and trusted products and services. Remember, nobody knows loyalty quite like a dad.

Charity Stebbins is head of content and communications at Conductor, a content and search engine optimization platform.

How to Improve Customer Retention Through UGC