The mid-summer event that Amazon.com invented last year will continue to be a hotly competitive time for years to come. Taking the learnings from the inaugural event, Amazon expanded the sale with more frequent deals on and a larger focus on calling out the additional benefits of Prime membership. Amazon made major strides in building Prime Day awareness with a big push to attract consumers looking for deals on a variety of products.

In the shopping holiday’s second year, other retailers also looked to capitalize on the opportunity that the event created with promotions of their own, many emphasizing the broad availability of their sales. For instance, Wal-Mart featured discounts on items like electronics and offered free shipping on its website throughout the week of Prime Day with no minimum purchase. Best Buy and eBay also made special efforts to separate themselves during the Prime Day period, using messaging on their websites like “No membership needed” and “Exclusively for everyone.” The examples below show web pages from major retailers, showcasing new deals and various forms of free shipping promotions. 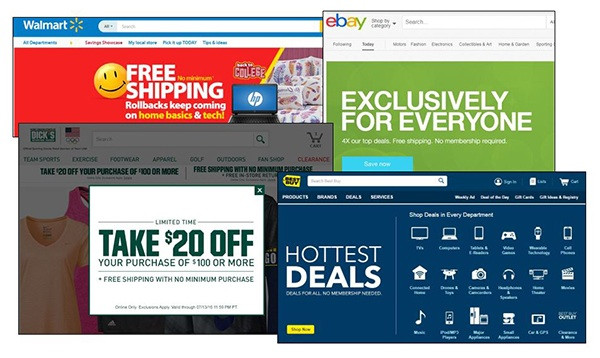 In addition, Amazon differentiated itself by offering items during the sale that were unique to the retailer. Market Track conducted a retailer analysis of products offered on Prime Day and discovered that many of the deals Amazon offered were on products that other retailers didn't have in stock. This strategy gave Amazon the ability to offer exclusives without being directly challenged by competitors like Wal-Mart, Target, Best Buy, and Toys"R"Us.

Market Track reviewed its cross-media advertising and promotions data to see what tactics Amazon leveraged across media types in advance of the big day. The figure below shows how the online retailer advertised across all major channels to get Prime members (and potential new Prime members) excited about its deals. Now that other retailers are aware of the new annual shopping day, Amazon ramped up its advertising efforts, using an aggressive media mix to get consumers’ attention. 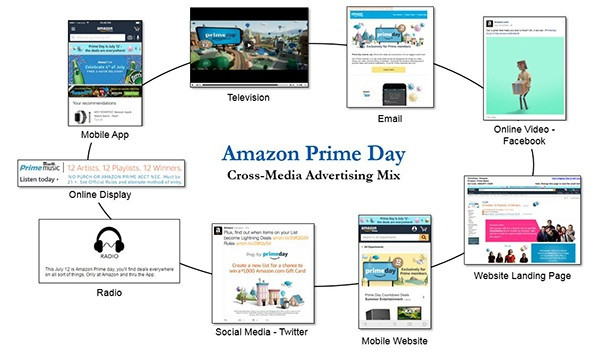 The second annual Prime Day was officially announced on June 30, and Amazon kicked off early deals via email. Much like Black Friday, the event was pulled forward before the official July 12 date. This included a large push on social media, with over 25 individual Facebook posts about the shopping day occurring between the announcement through the day of the event. Amazon tweeted about Prime Day even more frequently, while also retweeting and engaging with followers about the upcoming deals.

A big part of the Prime Day advertising revolved around an animated campaign, which shows characters receiving packages and enjoying Amazon products. The animation aired on national TV on July 4, and featured different areas of a city while a voiceover exclaims how deals can be found for each setting on Prime Day. The next day, Amazon repurposed the animation style in a tweet with the caption “Woo hoo! The deals are coming!”

Radio ads complemented the messaging in the television campaign as well, with slight variations. The voiceover during the TV campaign explains how shoppers can find deals “on things you really want and on things you really need.” The radio campaign took a similar approach and expanded a little further, describing “deals everywhere on all sorts of things, simple things, useful things, amazing things, deals on things you want, things you need and everything in between.”

Amazon’s presence in mobile and online display advertising also had some overlap, with both channels showing a consistent focus on the “Countdown to Prime Day” message. Some of these ads even featured an offer code targeted at potential new Prime members.

As Prime Day becomes a more commonplace shopping holiday among consumers, we’re likely to see Amazon try new tactics. The initial buzz it got from the inaugural event may have worn off, but it's proving its ready to fight to gain the interest and loyalty of today’s shoppers.