Last week, Dollar General announced price cuts on hundreds of items across 2,000-plus stores. This announcement reflects the retailer’s goal to increase store visits from its core low-income demographic. It also comes three months after Wal-Mart said it would speed up price cuts to restore its reputation as the retailer with the lowest prices. According to an article on CNBC, Wal-Mart’s price cuts helped the retailer's U.S. division deliver the largest same-store sales increase in four years last quarter.

Last week, Market Track reported on Wal-Mart’s prices for top-promoted categories. We compared the promoted prices of top categories against other grocery and mass-channel competitors and found that prices were often comparable. In today’s highly competitive retail landscape, Dollar General will need to put its best foot forward to stay on pace with the pricing strategies of Wal-Mart and others, but the discount retailer insists that it's doing just that.

"These price reductions are meaningful and recognizable," said Dollar General CEO Todd Vasos, while addressing investors. Vasos also mentioned that Dollar General is focused largely on fast-turning categories like consumables, adding “these are the items that will actually drive additional foot traffic into our stores." The end goal being that consumers will purchase extra, more discretionary items once they’re in a Dollar General store.

To provide a comparison between the two retailers, Market Track reviewed our circular advertising data across some of the most promoted circular categories. The chart below shows the average circular promoted price by month on all carbonated soft drinks from Dollar General and Wal-Mart. We can see that the two discount retailers are more or less neck and neck with one another in this category. We can also see that Dollar General offers promotions on these categories much more frequently than Wal-Mart, in part due to Wal-Mart’s pared back circular schedule. 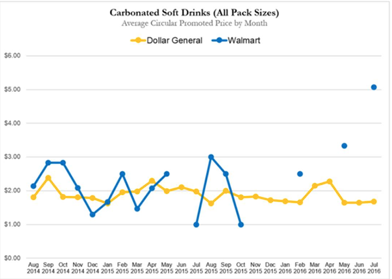 The potato chips category, which is also one of the most heavily promoted in circulars, has shown competitive pricing, too. Both Wal-Mart and Dollar General have kept their average promoted price comparable throughout the past two years, but Dollar General’s prices do appear to be trending up. Given its recent announcement, we may start to see prices in this category fall back in the coming months. 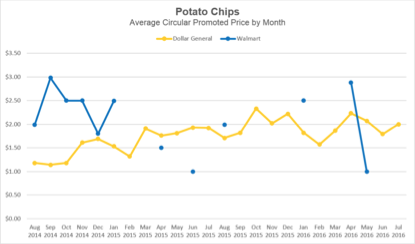 Lastly, we reviewed our circular data on pricing for cookies. While Wal-Mart has been competitive in the previous categories, we found that its prices are consistently higher than Dollar General’s prices in this category. In only one of the past 24 months did Wal-Mart promote lower prices for cookies, which occurred in April 2015. 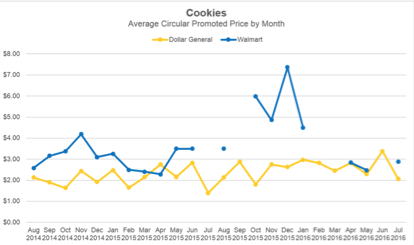 While Wal-Mart does have a few gaps where it isn't promoting these three categories in its circulars, the data shows us that it's usually evenly matched with Dollar General when its promotions do occur. As pricing continues to remain competitive across these key categories, both retailers will need to continue their hard-fought battle to capture sales from budget-conscious shoppers.

If you would like to learn more about Market Track’s competitive pricing data, call 312.529.5102 or visit us here.

4 Creative Ways to Use Gift Cards to Drive Sales