The struggles of brick-and-mortar retailers in 2017 have been well-documented. Iconic brands such as J.C. Penney, Macy's and Sears have all announced store closures this year, and other mall-based retailers such as The Limited, Wet Seal, and American Apparel have gone out of business. Why? A common reason cited is less in-store traffic, the result of more consumers going online to shop. And when you think e-commerce, most consumers think Amazon.com.

With that in mind, Total Retail surveyed its audience on their brick-and-mortar sales over the past years, segmented by B-to-C, B-to-B and hybrid (both B-to-C and B-to-B) retailers. The results, which were featured in the recent Total Retail and IBM report, The Amazon Effect: How Retailers Are Adapting Their Businesses to Better Compete With the Industry Leader, weren't surprising. In particular, B-to-C retailers’ brick-and-mortar sales seem to be most impacted by the growth of Amazon. See the chart below: 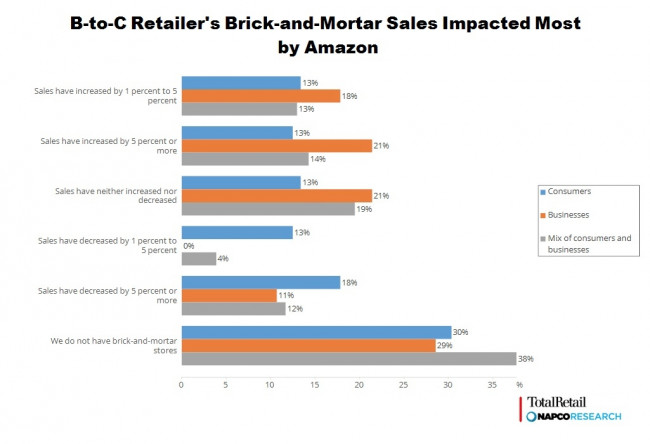 We’ll continue with our coverage of The Amazon Effect report next week. In the meantime, make sure to download the full report here.

Every Store Will Have a Brain