Amazon Trends for the Holiday Season

Shoppers looking for a discounted Amazon Prime membership were able to snag one last week for $79 (about 20 percent off) for one-day only. According to an article on Fortune, shoppers were able to take advantage of this offer from Nov. 18 at 12:00 a.m. ET until 11:59 p.m. PT. The limited-time Prime deal was a promotion for The Grand Tour, an original 12-week series on Amazon starring Jeremy Clarkson, Richard Hammond and James May. The first episode premiered on Amazon Prime Video the same day as the limited-time $79 offer. 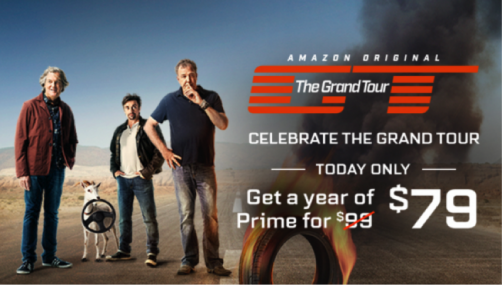 The rare Prime deal debuted alongside Amazon’s early Black Friday sales, which started on Nov. 18 and continue through Dec. 22. As the holiday shopping season gains momentum, we're finding some interesting price trends on various categories throughout Amazon. The chart below shows the online pricing index for Amazon’s 2016 Toy List. We see that since Oct. 1, the average listing price on all of these toys trended downward, but spiked back up again on Nov. 6. The average listing price for products on the toy list increased by 3 percent between that point and Nov. 11. These fluctuations in price tell us that the season is more than just one continuously improving discount. Consumers who want to maximize their savings this holiday season must remain diligent day in and day out, and not necessarily wait to take advantage of a good deal. 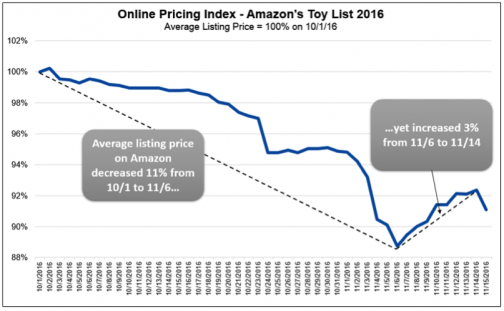 While the e-commerce giant started its deal offerings on Nov. 1, Amazon just recently detailed plans for the major Thanksgiving shopping weekend — including Cyber Monday. Amazon has already started offering discounts on products like toys, TVs and its own branded electronics. A recent USA Today article reported that Amazon will have new deals as often as every five minutes. It also advised shoppers looking for the best discounts to keep an eye on what Amazon calls the "Turkey 5," or the five shopping days between Thanksgiving Thursday through Cyber Monday.

When tracking prices on specific products Amazon said it will be discounting for the holiday season, Market Track found that some fluctuation has already occurred since Oct. 1. While items like the Amazon Fire Tablet 8 and the Nest Thermostat (3rd Generation) have stayed consistent in price thus far, there’s been noticeable movement on other products — e.g., the Amazon Echo. The graph below shows us that the Echo had a short discount in price during early November. Meanwhile, the Sphero Star Wars BB-8 Droid has shown significant fluctuation, taking a dip in price during early October, only to go above the index for a short period in November before coming back down again. As of Nov. 15, the BB-8 Droid was priced at 85 percent of the Oct. 1 price on Amazon. 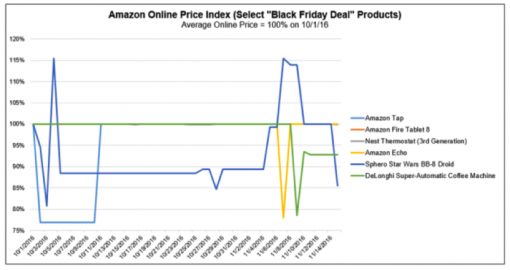 As retailers look to drive urgency during a holiday shopping period that's increasing in length, Amazon has found a potential solution in the form of in-the-moment deals — i.e., sales that give way to new sales as quickly as they arrive. With the sporadic price fluctuations that are already occurring, close monitoring of online pricing becomes critical for all retailers and brands. A shopper’s decision to select one retailer over another can happen quicker than ever before.

Continue to check in with Market Track throughout the holiday shopping season for the latest online pricing intelligence.

Dan Muller is a marketing specialist at Market Track, a company that monitors creative advertising across all channels, as well as print and digital promotional data throughout the U.S. and Canada, giving advertisers the ability to track competitive activity.

Amazon vs. Google: Which is Best for Business?

A Guide for Maximizing Profits on Amazon