The Amazon Effect: How Retailers View Amazon's Position in the Marketplace

As noted in last week's issue of Total Retail Executive, Total Retail recently released its latest research report, The Amazon Effect: How Retailers Are Adapting Their Businesses to Better Compete With the Industry Leader. The report analyzes the impact Amazon's growing influence is having on the retail industry, and what retailers are doing as a result, from increasing spending on technology to implementing some of Amazon's digital innovations on their own sites. (Our research report from Q1, Top 100 Omnichannel Retailers, is still available as well.)

This week we feature a chart from the report that depicts how retailers view Amazon's position in the marketplace relative to their business. 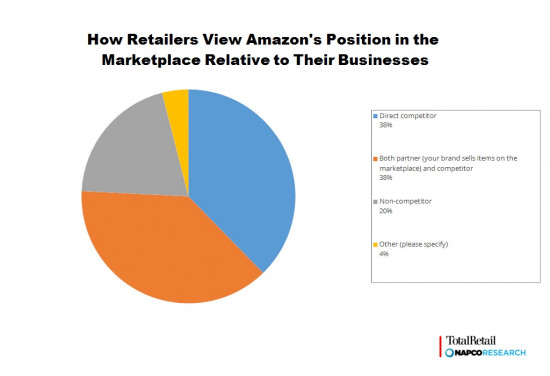 The results to this question were a bit surprising, as one would figure that Amazon would be viewed as a director competitor by more of the 327 survey respondents. Perhaps retailers are throwing up their hands and taking the approach, if we can't beat them, we might as well join them, as illustrated by the fact that 38 percent of respondents have chosen to sell their products on Amazon's marketplace.

Furthermore, most surprising is that 20 percent of respondents view Amazon as a "non-competitor." With all of Amazon’s recent acquisitions, most recently its purchase of Whole Foods Market, it has grown its product reach into nearly every vertical. It’s hard to imagine that 20 percent of retailers still don’t consider Amazon to be a competitor to their business. If you’re selling products online (and now even in brick-and-mortar stores for certain categories such as food and books), don’t you have to be wary of Amazon?

We'll continue with our coverage of The Amazon Effect report in next week's issue of Total Retail Executive, looking specifically at how retailers perceive Amazon's penetration into their markets during the past two years. In the meantime, make sure to download the full report!

Amazon Expands 'Buy with Prime' to US Merchants